A novella exploring memory and ageing by poet and fiction writer Professor Bryan Walpert has just won a trans-Tasman literary award. He was inspired after doing an online course about Beethoven’s music – motivated by a wish to better understand his own students’ experiences of distance learning.

Professor Walpert, who teaches creative writing in the School of English and Media Studies, was announced as one of two winners of Australian publisher Brio Books’ Viva La Novella 2020 award on September 16 for his novella manuscript, Late Sonata. His work was shortlisted for the 2020 Seizure (an imprint of Brio Books) award in February, from 125 entries by New Zealand and Australian authors.

The publisher describes the short novel this way: "Inspired by the structure of a piece by Beethoven, Late Sonata follows musicologist Talia and her novelist husband as they deal with the effects of dementia, revelations of infidelity and the death of their concert pianist son. This is a formally sophisticated and emotionally engaging novella.”

The judges, David Henley and Alice Grundy, said: “We love Bryan’s novella for its seamless melding of the emotional and the intellectual, its brilliant evocations of music and literature and a structure that offers both suspense and humour. Out of more than 120 entries from debut and published authors, Bryan’s novella was remarkable for its polish and sophistication. We are very proud to be publishing it as one of this year’s winners.”

Professor Walpert is the third New Zealand-based writer to win the award – which names two winners each year – in the eight years it has been going. This year's dual winner was Lana Guineay, with her novella titled Dark Wave.

Professor Walpert, who teaches creative writing to distance learners, started writing the book in 2014 after enrolling in a music course in order to walk in his students’ shoes. He knew little about Beethoven but discovered his love of a particular sonata (Piano Sonata No. 30 in E Major, Op. 109) along with new insights on learning.

“My inspiration for this novella came from taking a massive open online course (MOOC) on Beethoven’s sonatas. I took the course both out of interest in the subject matter and to have a sense of what it was like to be a student in a large distance course offered by a major MOOC provider, Coursera.

“I loved the feeling of freedom in taking the course on something completely new – there’s no pressure to be good at it, or to have the responsibility of being an expert. There is a great pleasure in being a beginner – there’s a feeling of risk and a little nervousness, but at the same time a great pleasure in entering a new subject – no ego, nothing to prove, just there to learn.”

But he put his writing project on hold for four years due to other demands, including writing a scholarly book on poetry and mindfulness, and picking it up four years later and completing the 40,000 word manuscript last year with the support of a Massey University Research Fund (MURF) grant.

With a poet’s interest in structure and the evocative, suggestive powers of language, Professor Walpert says he found a connection between language and music through studying a particular sonata he loves.

It was the emotional range of the music that made an impression on him, evoking for him a sense of yearning as well as anger and quiet acceptance that sparked the idea for the novella pivoting on memory, meaning and growing old – topics that have long fascinated him. 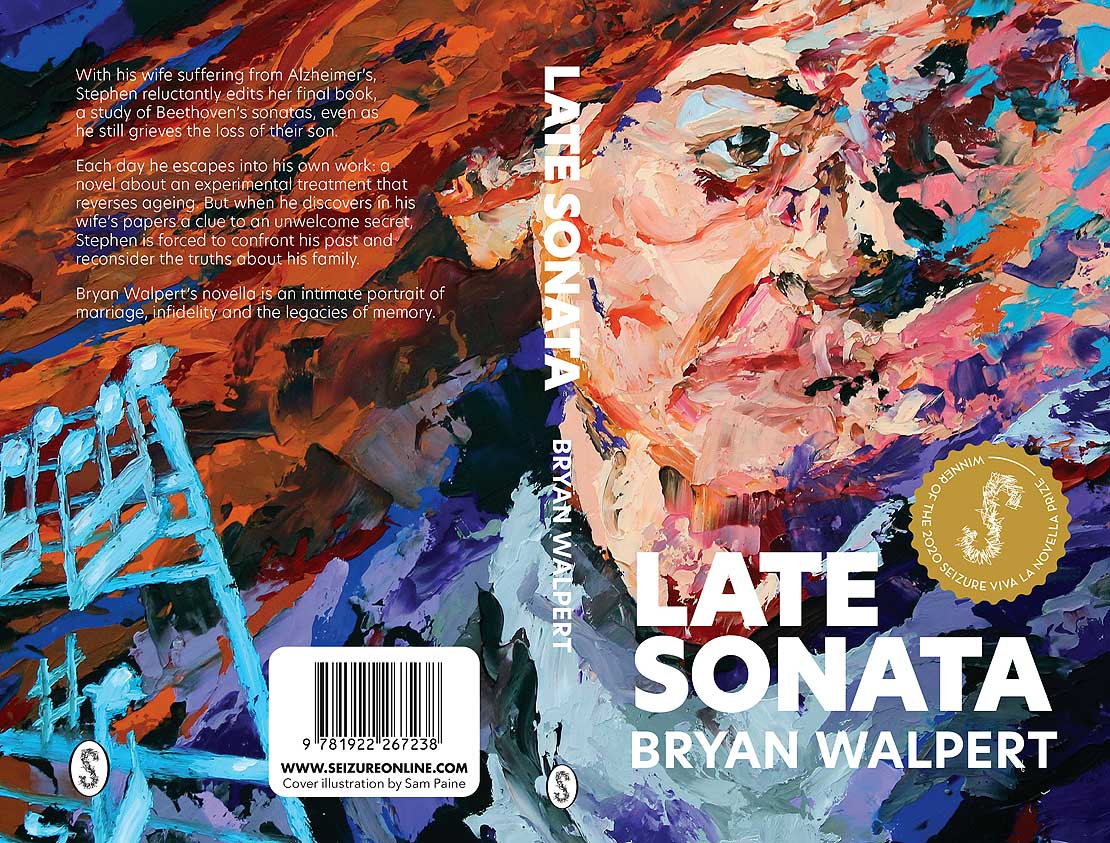 A recent resurgence of the novella – “an ambiguous beast” as he calls it – is due, in part he suspects, to the prevalence of electronic publishing.

While the line between a short novel and a long short story can be blurred, novellas can range from 20,000 to 50,000 words. Celebrated examples include The Old Man and the Sea by Ernest Hemingway, The Stranger by Albert Camus, Of Mice and Men by John Steinbeck, Animal Farm by George Orwell and The Metamorphosis by Franz Kafka – though all of these books are sometimes referred to as novels.

The appeal of the novella? “It’s really concentrated. It’s not as expansive in scope but also more dense and compressed than a longer novel, so it lends itself to the lyric and evocative nature of the short story,” says Professor Walpert.

Late Sonata will be launched in Auckland on November 8, at Open Book bookstore on Ponsonby Road, with a live performance of the sonata by pianist Ludwig Treviranus. There is a $1000 cash prize and publication by Seizure.

“Happily, its focus on Beethoven’s Piano Sonata No. 30 in E Major, Op. 109 corresponds to celebrations of his [Beethoven’s] 250th birthday this year,” he adds.

Professor Walpert says the MURF grant was an important factor in allowing him to complete his project. “It gives you more time and space to think. And to focus – it’s a really wonderful resource.”

Greenshell mussels beneficial in the fight against osteoarthritis