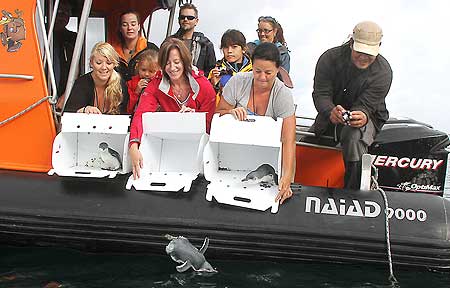 Members of the National Oiled Wildlife Response Team release the last seven penguins back into the sea near Motiti Island.

The penguins were all Motiti Island birds, and had been cared for at Massey University, where the team established a wildlife cleaning and rehabilitation facility following the decommissioning of the Te Maunga wildlife site last month.

The birds were released near Motiti Island from a boat by members of the oiled wildlife team.

Team co-ordinator and Massey University wildlife veterinarian Kerri Morgan says the event was expected to be the last release of multiple birds rescued and treated for oiling.

“We still have two birds in care at Massey – one has an injury and the other is going through its moult. We will release those birds back into the Bay of Plenty when their health allows it, but the release of the seven Motiti birds this morning is probably the last release we will see of multiple treated birds.”

Members of the team arrived in Tauranga on October 5, just hours after Rena ran aground, in line with national oil spill response emergency planning.

A large-scale wildlife response was launched the next day and a facility built at Te Maunga to treat, rehabilitate and house affected wildlife until their habitats were ready for them to return.

The first wildlife release was held on November 22, and since then, birds have been released back into the wild as their health and their habitats have been signed off as ready by wildlife experts.

At the height of the response, more than 400 birds were being cared for at Te Maunga.

Miss Morgan says wildlife responders from all around the country had assisted with the response, and teams had been in the field checking for affected wildlife since the first days after Rena grounded.

“Over the past month our field teams have picked up only five oiled birds, despite regularly scouring the affected areas and also following up on reports from the public to the 0800 333 771 oiled wildlife line,” Miss Morgan says.

“This is really reassuring as it shows us that the amounts of residual oil in the environment are not having a significant effect on wildlife.”

Ms Morgan paid tribute to the supporting agencies and individuals who had assisted in the response.

“We have worked very much in partnership with the Department of Conservation, which has been instrumental in mounting an effective and comprehensive response,” Miss Morgan says.

“We have also had tremendous support from a number of agencies, as well as vets and ornithologists from around the country. We have also had incredible commitment from volunteers who did an enormous amount of legwork in looking for affected animals and helping us clean and care for them.”

Miss Morgan says it had been hard work, particularly at the height of the response when the sheer numbers of sick and dead birds being collected was at times overwhelming. A total of 2299 dead birds were collected during the response, 1443 of which were oiled.

“We know this work takes a lot out of people and we do want to acknowledge the wonderful commitment and dedication the entire team has put into this response.”

“The fact we have got to the point where we can count the number of affected birds left in care on one hand is a real milestone in the response and recovery operation,” Mr Courtnell says.

While the 0800 333 711 number would remain active, and wildlife responders would be on hand to follow up on any reports of affected wildlife, the wildlife team would cease having a presence in the incident command centre.

“The fact they are now leaving is actually a measurement of their success and an indication of the commitment and dedication they have shown to getting the job done. We are all tremendously proud of the wildlife response the team has mounted.”

Mr Courtnell says the oil spill response was continuing with around 60-70 people in the field every day assessing the coastline and cleaning residual oil.

“It’s important to recognise that while the bulk of the oil is safely off Rena and the bulk of the oil spilled has been cleaned up, we still face a threat from the wreck, in the form of a few pockets of oil that the salvors can not reach,” Mr Courtnell says.

The exact amount of oil left on Rena was impossible to quantify but was estimated to be in the order of tens of tonnes.

“While it is very unlikely we will see all of that released at once, there is still the potential for a spill which could cause a shoreline impact and affect wildlife,” Mr Courtnell said.

“The oil spill and wildlife response teams remain ready to respond to another spill from Rena in the event any of those pockets of oil are released. We are continuing to plan and ensure we have the equipment and resources on hand to respond as needed.”