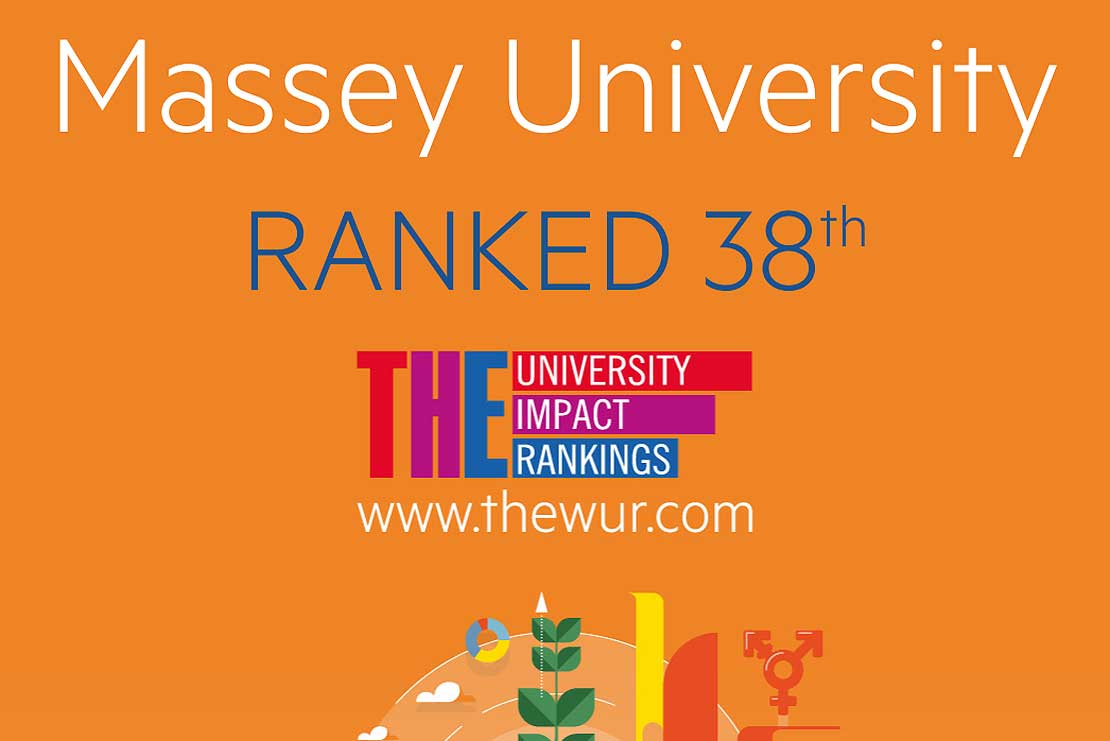 The social and economic benefits of universities have been recognised for the first time in a new rankings measure devised by Britain’s Times Higher Education in what it calls Impact Rankings.

Based on the United Nations Sustainable Development Goals, the rankings measure each university’s contribution and performance in relation to each goal, such as health and wellbeing, reducing inequality, gender equality, climate action and quality education.

Massey University, with a ranking of 38 in the world out of more than 500 universities that submitted data for the new measure, is one of several New Zealand universities to perform exceptionally well, Vice-Chancellor Professor Jan Thomas says. “The University of Auckland is to be congratulated for an outstanding performance as number one in the world. I believe that reflects well on the entire nation.

“This exercise is valuable to the universities,” Professor Thomas says. “It makes us pause and take stock of what we do, align with collaborative global goals and examine our contributions against these goals in a way that can be globally benchmarked.”

She says it reflects very positively on the commitment staff have to their communities and the general wellbeing of the nation and Massey University’s place in the Pacific and the world.

Traditionally, rankings measure research outputs by the numbers of citations academics receive from other academics, ratios of academic staff to students, employer perceptions of the quality of graduates from particular institutions and academic perceptions of the quality of research undertaken by other academics. Times Higher Education says the impact rankings demonstrate an institution’s commitment to supporting the UN sustainable development goals in teaching, research and knowledge transfer but also embodying them in its internal practices.

The rankings system focused on 11 of the 17 goals and Massey received rankings in the top 200 for all 11 of them. Seven of those were in the top 100 and four of those in the top 50, with its highest ranking – 15th in the world – for its contribution to the Sustainable Cities and Communities goal.

Its next highest ranking was 21st for the Gender Equality goal, followed by Partnership for the Goals (31), Decent Work and Economic Growth (46), Responsible Consumption and Production (51=), Reduced Inequalities (74), Good Health and Wellbeing (94). It ranked between 101 and 200 for Industry, Innovation and Infrastructure, Climate Action, Quality Education and Peace, Justice and Strong Institutions.

Examples of what Massey does to achieve the Sustainable Cities and Communities goal include allowing public access to its libraries, historic buildings, galleries, artworks and green spaces along with its contributions to local arts and theatre groups and its ownership of the Massey University Press.

For Gender Equality, it offers a range of policies, facilities, courses and mentoring schemes aimed at supporting women students and staff. For Decent Work and Economic Growth, it recognises unions and labour rights and offers collective bargaining and its Equal Opportunities Policy is aimed at preventing discrimination in the workplace and it tracks and addresses pay scale gender equity through its Pay and Employment Equity Implementation Group.

More information about the rankings and the performances of all universities is available on the Times Higher Education website.

"Helping young people change their path is my 'why'"

Opinion: Academic freedom and our commitment to diversity and inclusion