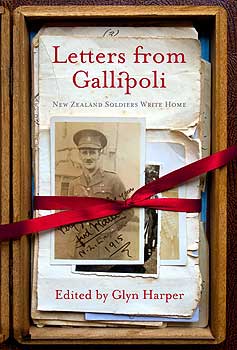 A new book by Professor of War Studies Glyn Harper, telling the story of the World War I Gallipoli campaign through a collection of letters written by New Zealand soldiers, will be released next month.

Letters from Gallipoli, New Zealand Soldiers Write Home gives a unique and personal history of the most significant commemoration of military casualties and veterans in Australia and New Zealand.

Professor Harper is head of Massey University's Centre for Defence and Security Studies and a widely published scholar of military history. He and his wife Susan collected 600 letters over the course of two years, with about a third appearing in the book.

The letters are compiled largely unedited. Professor Harper has kept grammar, punctuation and spelling changes to a minimum, choosing to view them as they are and preserving their imperfections.

“We have included the letters we consider to be most vivid,” he says. “These letters are important historical documents, often written under the most extreme circumstances.”

Letters reveal that living conditions were hard. Soldiers tell of having to shave from a small can of water. Bathing was done at great risk, on the beaches – as was swimming to escape the heat. Though few complained about the food, parcels from home with news and luxury items helped keep spirits up. Among requests was an occasional block of plain chocolate, “as we can never buy any here”.

Writing paper was in short supply and soldiers used anything they could find. Corporal Valentine Neels, of the Auckland Mounted Rifles, used the cardboard base that artillery shells were rested on to write a letter, which is now kept at the National Army Museum in Waiouru.

Professor Harper says more than 300 letters were published in New Zealand newspapers in 1915. “Clearly the New Zealand reading public was hungry for news of ‘their boys’ overseas, and newspapers served their appetite. They are at times painful, sad and frustrating but offer a unique first-hand account of what New Zealand soldiers endured at Gallipoli and a more complete recognition of their place in the nation’s history.”

The book, published by Auckland University Press, will be launched at Massey's Wellington campus on April 6.