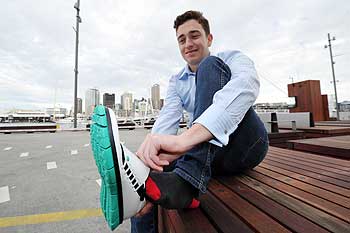 Industrial design graduate Nicholas Couch has won the coveted James Dyson Award for his design of a recyclable shoe designed for barefoot running.

It is the fifth consecutive year in which a Massey University student or graduate from the College of Creative Arts has won the award. It was presented at a function in Auckland last night and recognises emerging product designers whose ideas best demonstrate innovative and inspiring solutions to everyday problems.

Mr Couch, 23, who studied at the School of Design in Albany, says his shoe is designed to help athletes wanting to take up barefoot running make the transition with footwear that makes the change a more natural process and also reduces injury.

Up to 350 million other sports shoes are bought and thrown away each year, he says.

While changeover shoes like his are available on the market, the ‘Transition’ shoe is the only sustainable barefoot-style design that features replaceable and recyclable parts.

“Often, these shoes are discarded when only one part – usually the sole – has worn out while the rest of the shoe remains in good condition but goes to the landfill.”

The Auckland designer says his shoe is made up of only five parts, with each part designed to be discarded only when required. Made without glue adhesives, the discarded part can be broken down into their original material and can be recycled.

While Mr Couch has researched the marketplace and produced a prototype, the product is at concept stage only. He would welcome an opportunity to commercialise his design.

“The design can be applied to more than a barefoot running style shoe. It challenges the status quo which resonates with the Dyson philosophy of making products work better.”

Mr Couch’s prize package includes a trip to the UK worth $3000, courtesy of the British Council New Zealand. He will also get to visit the London office of product manufacturer Dyson and meet with members of the UK design community.

All three finalists are eligible for the global James Dyson Award to be announced in October.