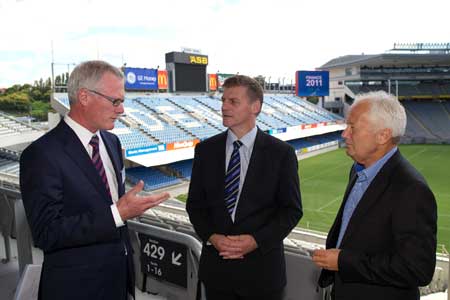 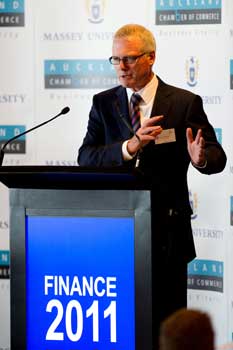 Finance Minister Bill English spoke about the “original and exciting” partnership between the University and Auckland Chamber of Commerce at a business lunch at Eden Park today.

Mr English addressed 150 invited leaders of the business community at Finance 2011, the second annual function co-hosted by the two organisations where he gives a state of the economy address.

“It is a big step forward when these two organisations get together,” he said. “It is an acknowledgment of the contribution that the University can make with their vast resources of knowledge research and people and putting that together with the chamber was something I thought was original and exciting. It would seem to me to be a very good idea to support it.”

Vice-Chancellor Steve Maharey opened the event and spoke about how Massey had one word at its heart and that was “impact”.

“The big impact we had at the start was on the agricultural industry – we underpinned it, we made it profitable by providing the kind of research and capacity that was needed in the industry.”

Mr Maharey said the University had carried on right through its history, having impact in education, creative arts, science, business, humanities social science. “Our aim always is to have our academics and our students make impact, to change the things that we are doing in the country which of course is important.

“Right now more important than ever, we are going into what we at Massey call a new, New Zealand we are having to change very substantially to be successful in the 21st Century and what we want to do is to help it along.”

He spoke about the mission of the College of Business – creating leaders and transforming business – and said one key way to have impact was through the partnership with the Chamber of Commerce.

“Together we can do a whole lot more than we can do on our own,” he said.

During his speech Mr English defended the government’s asset sales plan saying it will enable Kiwi investors to put their money in solid, New Zealand-controlled companies.

He said that they weren’t “selling off the family silver” but would only proceed with the sale if the Government owned more than 50 per cent of the company.