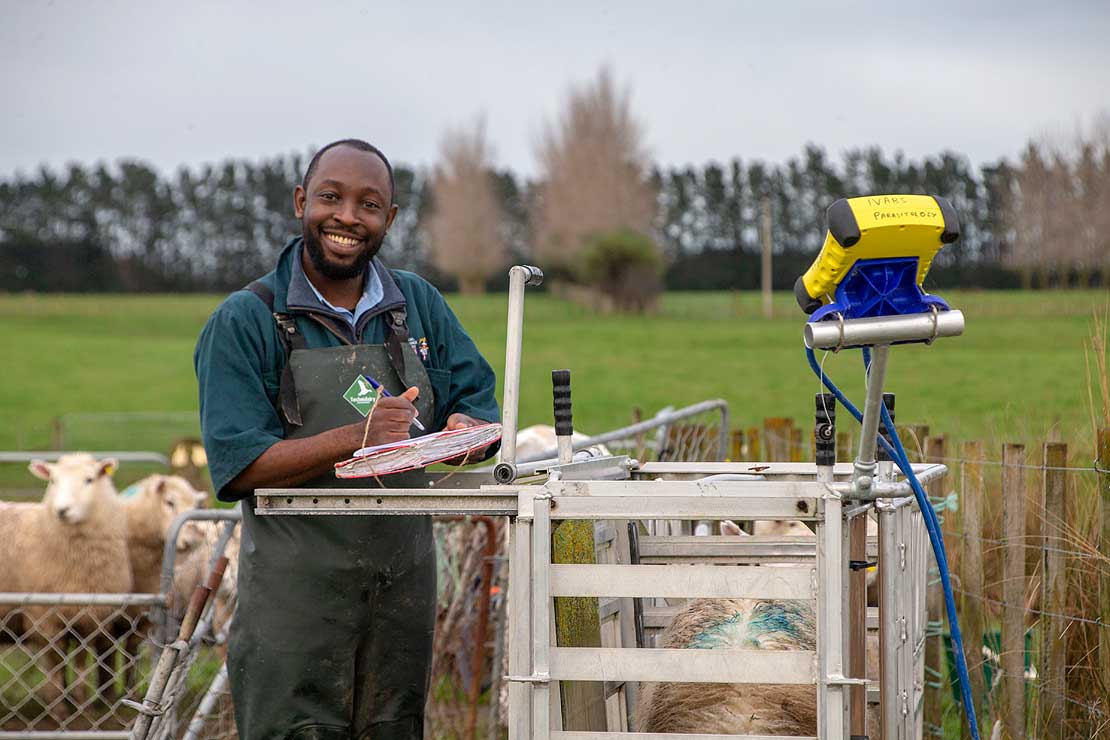 Seer Ikurior on a Massey farm

Massey PhD student Seer Ikurior, known as the “Worm Detective”, will represent New Zealand at a global competition in Germany.

Mr Ikurior won a competition this week at which doctoral and postdoctoral students studying in New Zealand and Fiji were asked to summarise their research in a three-minute presentation.

He presented his research – into helping farmers control worms in livestock – as if it were a television detective story. “I loved how tv detectives solved their cases,” Mr Ikurior says. “One thing they had in common, whether it was Kojak or Sherlock Holmes, was an element of surprise, but we are losing our element of surprise with controlling worms by our blanket, whole-mob treatment approach, as this increases selection for resistant worms.”

His research aims to develop a support tool to assist farmers to more sustainably control gastrointestinal nematodes (worms) in grazing ruminants, something that costs the New Zealand sheep industry about $300 million a year.

“The current way to detect worms is to count the eggs of worms in lamb faeces, which can be a tedious process for a large flock. My research uses GPS monitors and activity sensors to monitor the movements and activity patterns of infected and uninfected lambs, to see if there are monitorable differences in distance travelled and behaviours.”

So far, his results show that infected lambs idle more and move less than uninfected. He is now working on a behaviour index of activity trends and movement patterns that identify lambs with worms versus those who do not.

“I hope that by integrating this information into existing electronic identification ear tags, the farmer will be able to target treatment to only infected lambs. Targeted treatments means worms are exposed less to anthelmintic drugs and form less resistance.” Happy to come out on top

Mr Ikurior says he was happy to come out on top in an impressive field of 20 competitors at Falling Walls Lab New Zealand, held at the Royal Society Te Apārangi Aronui Lecture Theatre in Wellington on Wednesday night.

“It was an intense day. I thought that several of the ideas presented were really exciting and innovative and any of those ‘wall-breaking’ presentations could have come out on top. There was lots of adrenaline and I'm very thankful for the outcome, but I can tell you that it is a real collective achievement.

“I have had a super supportive cast: awesome supervisors and collaborators, a great team at the vet school and at Massey’s Research and Development Office for putting these opportunities out; random people I talk to about my ideas; and my family who make all this worthwhile. So those three minutes, and the win, is a real collective achievement.”

In November, Mr Ikurior will travel to the Falling Walls Lab Finale in Berlin, Germany, to compete against 100 finalists and present his work to distinguished guests.

The event is inspired by the world-changing event of the fall of the Berlin Wall on November 9, 1989, with the question at every Falling Walls gathering: Which walls will fall next?

Last year, more than 3000 applications were submitted for 77 Falling Walls Labs that took place in 57 countries worldwide. The New Zealand representative Ankita Poudyal was awarded third place with her presentation on Breaking the Wall of Inefficient Filters.