Kate Sylvester is capped by Chancellor Dr Russ Ballard
with an honorary doctorate in Fine Arts at Massey’s
graduation ceremony in Takapuna at the Bruce
Mason Centre on Tuesday. 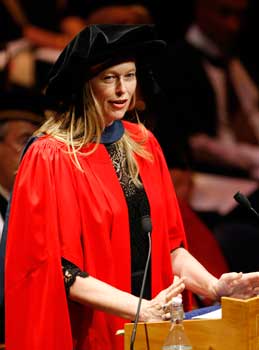 Top fashion designer Kate Sylvester concealed her chic attire under a traditional academic gown when she received an honorary doctorate in fine arts from Massey University in Takapuna today.

The Auckland designer with a reputation as one of Australasia’s premier fashion creators was capped at the College of Creative Arts’ graduation ceremony on Tuesday afternoon, in the second of six graduation ceremonies for the University’s Albany campus this week.

Dr Sylvester was as a design student in the mid-1980s at the then-Wellington Polytechnic (now Massey’s College of Creative Arts), and she was inducted into its Hall of Fame in 2008. The latest accolade recognises her contribution to New Zealand’s economy and enhancement of the country’s creative fashion industry internationally, according to a citation read at the ceremony by Zambesi fashion designer Neville Findlay (ONZM).

In her acceptance speech at the ceremony to honour graduates from the Colleges of Creative Arts and Education, and the New Zealand School of Music, she recounted how her declaration at a high school careers evening that she wanted to be a fashion designer was greeted with the comment “no such jobs exist in New Zealand.”.

But she stuck with her “ridiculous dream” of making “beautiful, unique garments” that would one day be sold all over the world, appear in Vogue magazines and be shown by international models. “None of these things were a reality when I started. Now, they are part of my daily life,” she said.

She urged graduates to “dream preposterous dreams, be brave, be ambitious – and remember you have to work really hard”. She thanked her parents for their support, as well as her business partner and husband Wayne Conway, a graphic designer she met when they were both students.

Mr Findlay said the journey to Dr Sylvester’s global brand began when she was a teenager making most of her own garments “adapting patterns and turning op-shop garments into something quite different from their intended use”.

She learned the technical skills of pattern making and machining during a fashion design diploma in Wellington in 1985, before moving to London then Paris for three years. It was there that her creative flair flourished.

Dr Sylvester, he said, is committed to keeping her garments New Zealand-made, and to using sustainable, ethical textiles where possible, including top grade merino wool. “By factoring sustainability into all her decision-making, she hopes to one day be officially certified as carbon neutral.”

She has been an inspiration to many young designers too. “Not only has she inspired young designers as students, she has shown her confidence in the quality of Massey graduates by hiring them.”

Dr Sylvester – who can now add the title ‘Doctor of Fine Arts (honoris causa)’ after her name –  will also be talking up the benefits of tertiary education as part of the University’s new television and online advertising campaign linking its successful former students, staff and alumni with being part of “the engine of the new New Zealand”.

She will be the first “face of Massey” in the new advertising campaign, which debuts on television on April 17. It highlights Massey’s role as a driving force to meet the changing needs of New Zealand and the world in the 21st century.

In an event on Monday to announce her honorary doctorate, Vice-Chancellor Steve Maharey described Dr Sylvester as an example of the sort of success the University aims to inspire, and her honorary doctorate is in recognition of her impressive contribution in putting New Zealand’s fashion design on the world stage, and the qualities needed to achieve this.

“We recognise the astounding contribution she has made over the years in taking New Zealand fashion and design to a whole new level,” Mr Maharey says. “Kate’s triumph in elevating New Zealand design to a world-class, lucrative industry with a distinctly Kiwi flavour very much reflects what Massey stands for as a university. Making an impact, making a real difference to the way we do things in this country and globally – that’s what we aspire to.

“Fashion design is perhaps one of the more glamorous things you can do at university. But the flair, innovation and creative drive Kate has demonstrated in getting her collections shown on catwalks and sold in boutiques around the globe is what links her to other top achievers Massey has produced – whether they are devising new systems for cleaner water and affordable electricity in developing nations, creating new protein products to combat malnourishment, or researching sustainable farming techniques.

Mr Maharey says Dr Sylvester was nominated for an honorary doctorate last year by the College of Creative Arts and went through a rigorous selection programme before being chosen for the prestigious award.

“At the same time our marketing team was compiling a list of former Massey students who had gone on to great things and Kate was immediately identified as one of the best known and most successful New Zealanders to lead our marketing campaign this year, along with a number of highly successful former students. We are extremely lucky to have someone of Kate’s calibre to endorse what Massey has to offer our young people."