Home > About Massey > News > Beyond a joke - why humour matters (LOL)

Beyond a joke - why humour matters (LOL) 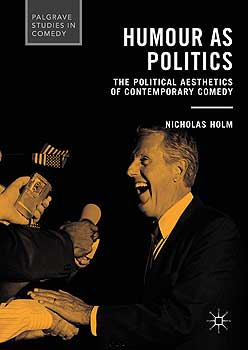 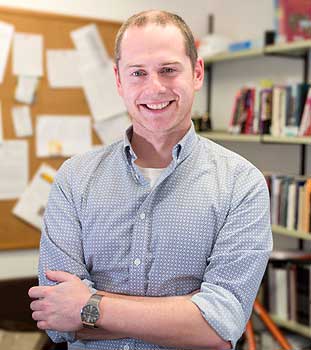 
Researching humour is not just a laughing matter for cultural studies lecturer Dr Nick Holm. He specialises in studying its multiple forms – from satire to deadpan – to understand how humour can make us chuckle and think more seriously about social and political issues.

In his new book Humour as Politics - The Political Aesthetics of Contemporary Comedy (Palgrave Macmillan), Dr Holm articulates the importance and power of humour in our culture ­­– not just as escapism or light entertainment but a vehicle for confronting topics such as racism, gender equality, sexism and even terrorism that reflect and shape how we see the wo

The purpose of book is “not to say what humour is, but rather what it does or can do”, says Dr Holm, who is based in the School of English and Media Studies at Massey University’s Wellington campus.

Comedians, cartoonists and satirists might be having a field day with the behaviour, body language and tweets of US President Donald Trump, for example, but their material also alerts us to deeper, less comical concerns of justice, human rights and democratic processes, he says.

Dr Holm, who has written seriously scholarly articles about local comedians the Topp Twins, as well as Taika Waititi and John Clarke (aka Fred Dagg), draws on a range of contemporary televisual, cinematic and digital examples, from Veepto Family Guy to Chappelle’s Show. He explores in the book how humour has become “a central site of cultural politics in the 21st century”.

Comedy television shows popular in the 1990s and 2000s – such as Seinfield, The Daily and cartoons from The Simpsons to South Park – have opened up the way we look at issues, he says. “There’s been a paradigm shift in the way we now laugh, what we laugh at – it’s quite a transformation.”

He compares the impact of popular American television series’ Friends as well as Seinfeld, to examine how both exhibit a “humour of awkwardness, provocation and even absurdity that would begin to assume a prominent role in popular humour over the next two decades”.

Comedy a vehicle for politics

And while he stresses that humour doesn’t have to be overtly political to have a political message, the popularity of current affairs and news-focused shows like The Daily Show and Last Week Tonight with John Oliver suggest a new level of engagement and awareness of political issues has emerged.

His book also looks at examples of when humour can cause offence and upset people, with racial and gender slurs masquerading as jokes. Or how humour tackles sensitive, taboo topics, such as terrorism and religious fundamentalism, such as in the work of British comedian Sasha Baron Cohen’s mockumentary Borat, or the satirical dark comedy film, Four Lions, about four British homegrown terrorist jihadis.

“These new modes of humour would change not just the way we laugh, but as a consequence of their popularity and cultural influence, also the way we make sense of, and engage with, the world around us.”

This evolution of humour – its subject matter and style – highlights “a growing willingness to grapple with issues in a public arena, issues that were previously kept behind closed doors,” he says, a phenomenon that also owes much to online and social media access to humour and comedy.

While he has written about broad connections across American, British, Australian and New Zealand comedy, he’s also analysed the specific characters and characteristics of Kiwi humour – from the Topp Twins (Lynda and Jools – now Dames) and their alter egos as farmers Ken and Ken, to Jermaine Clement and Bret McKenzie of Flight of the Conchords, whose hit show was filmed in the US.

“To understand the Topp Twins is to understand more than just New Zealand’s favourite music and comedy duo (with apologies to the Conchords), it’s also to understand how comedy has the power to unsettle ideas around gender, sexuality and what it means to be a New Zealander,” he wrote in a blog last year based on a lecture he delivered at Te Manawa Museum in Palmerston North, which held an exhibition celebrating the sisterly duo.

He sees links between them and America’s arch-camp entertainer Liberace, who “challenged dominant codes of mid-century masculinity”.

“Reaching back to the success of Liberace can help us illuminate and understand the success of the Topp Twins as an example of how popular culture can help audiences come to accept forms of identity and ways of life that could otherwise be encountered as threatening or troubling for some members of a community.”

Kiwi humour typically tends to be deadpan, as epitomised by the late John Clarke whose iconic New Zealand farmer Fred Dagg both celebrated and skewered the provincial mindset, a precursor to his success in Australia as a comedian and satirist. Dr Holm is currently working on a chapter for a book of essays on the humour of John Clark, having written about his work extensively as part of the firmament of Kiwi comics.  He is off to Estonia for intellectually sanctioned amusement later this month to take part in a panel discussion about his new book at a conference of the International Society for Humour Studies.

Being a humour scholar is fun, he admits, and it is also an important topic. “Despite some appearances to the contrary, humour is not trivial, nor a passing fancy, and though it may appear to be of less importance than the tragic, the serious, the sombre and the grave, nothing could be further from the truth.