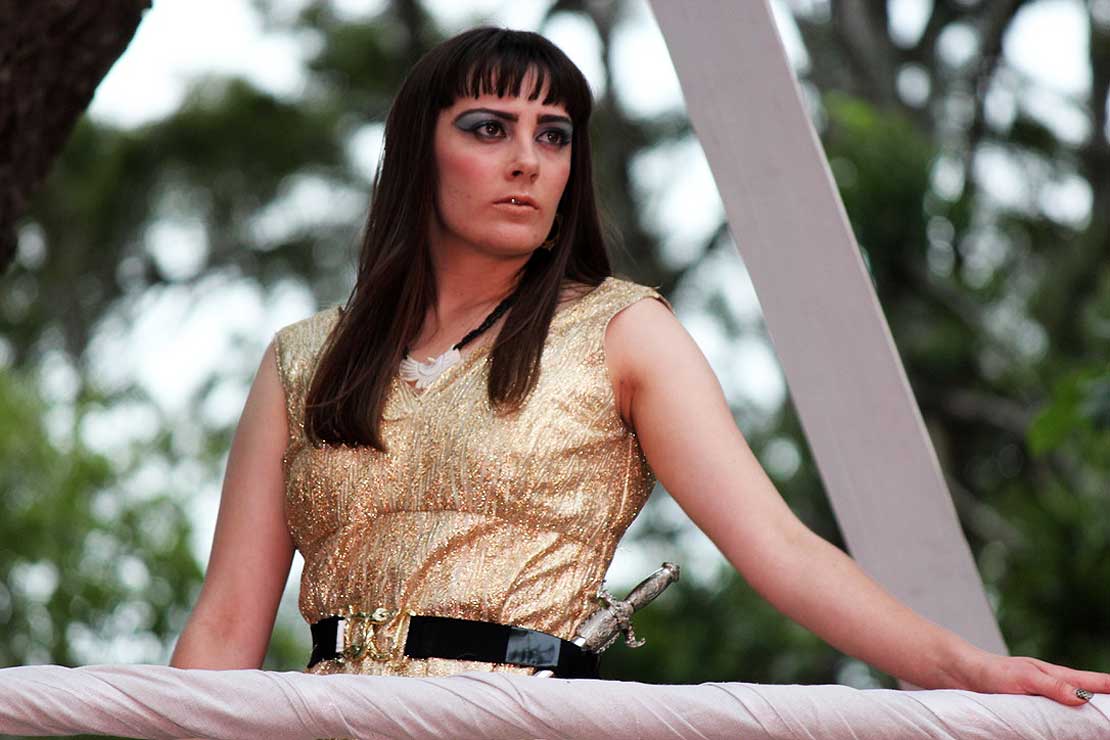 Massey students taking part in this year’s outdoor Manawatū Summer Shakespeare production of Antony and Cleopatra might feel they are in their 'salad days' – an expression that refers to a time of carefree innocence and pleasure of youth.

The phrase, from a line by Cleopatra – “my salad days, when I was green in judgment, cold in blood” – is one of the better known from the play to be incorporated into modern speech as well as for the title of a 1950s musical. The play itself combines politics, betrayal and an exotic love story which ends tragically.

Director, veteran screen and stage actor and Shakespearian stalwart Ralph Johnson says the play dwells on the attraction between “two flawed human beings” – Cleopatra, Queen of Egypt and Mark Antony, a Roman general. “They’re not heroic types – they fail often, but they redeem themselves through their humanity.”

Antony and Cleopatra begins with the titular lovers living together in Egypt when an uprising against Caesar in Rome forces Antony to return. However, Caesar does not fully trust Antony and begins to scheme behind his back. Cleopatra, meanwhile, is left behind in Egypt, where she sets in motion plans of her own – plans which Caesar may be involved in.

Mr Johnson has acted and directed numerous Shakespearian products in New Zealand and abroad, starred in television dramas such as The Legend of the Seeker, in Peter Jackson’s The Lord of the Rings trilogy and King Kong, and tutored theatre studies at Massey’s School of English and Media Studies. In this year’s production, he decided to cut the three-hour play by half, editing out minor sub-plots before rehearsals kicked off a few weeks ago. (left to right) Massey students Cameron Dickons as Octavius Caesar and Zak Rodgers as Proculeius with Verena McKenzie as Agrippa during a dress rehearsal.

Gender fluidity, a feature of several of William Shakespeare’s other plays, is also an element of this production. A requirement for 50/50 gender casting means there are women generals in the Roman army. It is a contemporary twist because they are not women pretending to be men, but women generals, he says. The set comprises a modernist Egyptian-style pyramid made of steel, while costumes have a futuristic look with military generals clad in motor cross gear.

“Much of the cast is made up from members and veterans of previous Summer Shakespeare productions, which means we’re already familiar with each other,” says Cameron, who plays Octavius Caesar. “Ralph has an exquisite attention to detail and a real drive to get everyone to their best. He’s also quite fun-loving – rehearsals with him are equal parts intense and goofy!”

Local actor Kathleen van Rooyen, who plays Cleopatra, says the Queen of Egypt famously played by Elizabeth Taylor on film and Judi Dench on the stage, “is a complex and fascinating character. She is ugliness and beauty, vice and virtue. Many stage and film adaptations often portray her as seductive and cruel. But those portrayals of her do not fully capture the queen that once bewitched the western world.” Theatre magic under the trees

Mr Johnson, currently Massey’s artist in residence, says he is glad to be working with “an experienced and enthusiastic production team, which feels such a blessing. In the cast, also, I feel that same verve. I feel delighted and privileged to be able to build on such a strong platform, to create the next piece of this tradition to enthral this year’s audience.”

This is his third time directing the Manawatū Summer Shakespeare. He’s been an avid fan of Shakespeare since going to see a production of Henry VIII as a boy at Christchurch’s Theatre Royale.

Award-winning playwright and theatre studies lecturer Professor Angie Farrow in the School of English and Media Studies, who launched the Manawatū Summer Shakespeare 16 years ago, says; “It’s a delight to have Ralph Johnson back amongst us. His productions of Romeo and Juliet and Comedy of Errors were outstanding – he knows how to get the very best from emerging actors.

“Since he last directed, the Manawatū Summer Shakespeare has gone from strength to strength attracting huge family audience and gaining a reputation as high-quality entertainment.”

The appeal of Antony and Cleopatra for local audiences? “It’s less to do with Shakespeare and more to do with being with a group of people picnicking, being part of creating magic under the trees,” says Mr Johnson.

Summer Shakespeare ‘not to be missed’