A student takes part in the 2017 National Biomechanics Day at the University of Waikato. 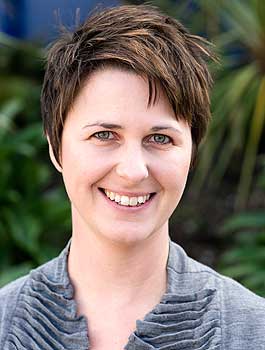 Thousands of students around the country are taking part in National Biomechanics Day next week (April 11), joining a growing global movement to teach school children more about biomechanics.

So what is it? Biomechanics is a multidisciplinary science, which studies human and animal movement and the physical biology of living tissues. It incorporates many STEM (Science, Technology, Engineering and Maths) disciplines, such as physics, biology, chemistry, and maths. Because every action involves a relationship between forces and motion, biomechanics can be applied to everything we do, including sports and physical activity. But it is not currently taught in secondary schools, and there has been a push from New Zealand biomechanics researchers to share their passion for the relatively unknown science with Kiwi children.

National Biomechanics Day, which began in the United States, is a celebration of biomechanics that will be held simultaneously in university labs across New Zealand, as a way to expose secondary school students to hands-on experiential learning activities centred around biomechanics research. The event has become so popular that it is now being celebrated by thousands of students and teachers around the world, including Canada, Brazil, the United Kingdom and for the second time, New Zealand.

Last year, more than 1000 secondary students (along with another 60-80 teachers/parents) actively participated in biomechanics-based demonstrations across New Zealand. Almost 50 per cent of the students involved were female and almost 40 per cent of all students were from schools with decile rankings below five.

The project is being led by Dr Sarah Shultz of Massey University’s School of Sport, Exercise and Nutrition, and is a collaboration between Auckland University of Technology, University of Auckland, University of Waikato, University of Canterbury, Lincoln University, and NMIT. It is part of the government’s A Nation of Curious Minds – He Whenua Hihiri/Te Mahara project, funded by the Ministry of Business, Innovation and Employment Unlocking Curious Minds Contestable Fund.

“Our first National Biomechanics Day was amazing, with really high interest from local schools and students,” Dr Shultz says. “We wanted to make sure that we were able to grow and be even bigger and better in 2018. We continue our goal to show how diverse and important biomechanics can be, so in addition to some great demonstrations about sport and exercise, we also have some cool stuff happening with animals, including dogs running on treadmills, and robots, plus applications in fields like medicine and creative arts.”

With 13 sites across the six universities and the one polytechnic involved, Dr Shultz says a new project has been developed with the aim of connecting students across the country in biomechanics research.

The Big Experiment, sponsored by Logemas, Vicon, and IMeasureU, is a hands-on demonstration of live data collection. Dr Shultz says the students will be both the researchers and participants. “Students will have the opportunity to complete a simple jump task while wearing cutting edge wearable technology. The data from the jump task will then be uploaded to a graph that they can see and access online during the event and also once they go home. As the day goes on, more and more data will be added the graph. We hope that the demonstration will not only have students critically thinking about the relationship between age and jump height performance, but also about how they were part of this national project,” she says.

“We know that there might be schools out there who can’t make it to one of the sites, so we have tried to build on our off-site engagement this year. Last year, we were able to have live streaming from different sites, and this year will continue the tradition, with live feeds on Facebook from Massey and Lincoln Universities. But we designed National Biomechanics Day to be hands-on, so we have teamed up with a Silicon Coach to deliver a Biomechanics Scavenger Hunt via social media. Schools will be able to contact us on Facebook to get the list of items. Students will then have to perform a series of biomechanics-related tasks and document their journey using videos and photos. Once the tasks are finished, schools upload their footage back to our Facebook event page to get their completion time. A leader board will keep track of how the schools have done,” Dr Shultz says.

You can follow National Biomechanics Day on social media:

Biomechanics Day hits the mark
Learning the mechanics of biomechanics