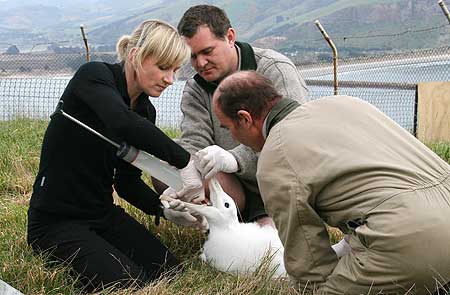 The young albatross gets acclimatised to
being home at Taiaroa Head.

A northern royal albatross was returned to Taiaroa Head on the Otago Peninsula today after being treated for a broken leg at Massey University's wildlife ward.

The young male albatross was brought to the ward, on the Manawatu campus, a week ago after Conservation Department staff noticed it favouring the leg.

X-rays showed the bird had a fractured femur. “Surgery was performed to insert pins into its leg, but we felt it best for him to recover at home, where he could be outside, so he we’ve brought him back to Dunedin," Ms Mogan says. "He still needs food and medication every day. We’ll come back in about five weeks to check the bone has healed and take out the pins.”

In the meantime the department's head ranger at Taiaroa, Lyndon Perriman, and his team will care for the albatross, which has yet to make its first flight. “It’s near the end of the breeding season," Mr Perriman says. "We’re usually only having to feed the odd bird that may have lost a parent at sea.”

Over the next month the bird will gain strength and exercise its wings, readying itself for its first flight, so it is a crucial time for its development, he says.

"Helping young people change their path is my 'why'"

Opinion: Academic freedom and our commitment to diversity and inclusion