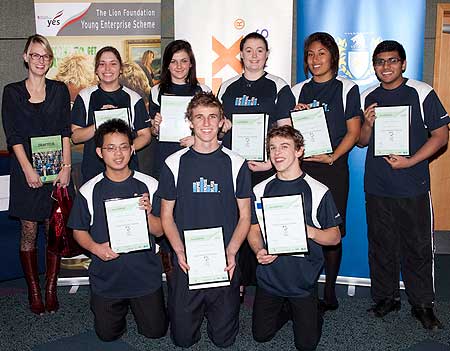 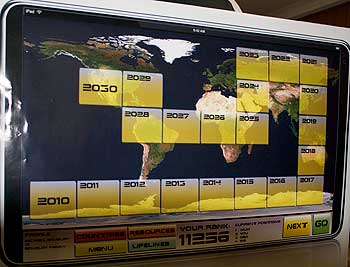 The instruction manual for Refuture2010 and how it
might look on screen.

A "board game on steroids" has won the national final of this year's Global Enterprise Challenge hosted by at the Albany campus this week.

Refuture 2010, which can be accessed by iphone, was designed by a team of eight secondary school pupils as part of the International Enterprise in Action event, which involved 72 year-12 and 13 pupils from schools throughout New Zealand.

The competition, organised by the Young Enterprise Trust, mixed the young men and women into teams that had 24 hours to create a game for a family living in 2030 that would address issues of that era.

The winners described theirs as “a board game on steroids with rich realistic online video content” where players put themselves in the shoes of country leaders faced with scenarios such as typhoon, famine or a refugee crisis. Team leader Claire Lowe, of Auckland's Senior College, said the ethos behind Refuture2010 was to reconnect families. “Families in 2030 might not have enough time to spend physically together but this brings them together and makes them communicate," Miss Lowe says. "They can play wherever they are. Educating the future leaders of our world through Refuture2010 allows families to learn from mistakes of the past and improve on their attitudes towards the world they live in.”

All teams were assisted by University staff with expertise ranging from marketing to finance, packaging, product development and food technology.

College of Business Pro Vice-Chancellor Professor Lawrence Rose presented every participant with a scholarship worth $1500. The winning team members received scholarships for their first semester’s fees, valued at around $2600. Professor Rose said the event's aims matched the college’s mission to create leaders and transform business by giving them the opportunity to interact and solve complex business issues.

Social Development and Youth Affairs Minister Paula Bennett, a Massey graduate, had urged the teams at the launch of the event to take their lead from entrepreneur Sam Morgan who had founded Trade Me when he was 22. “He didn’t achieve multimillionaire status on brains alone. He was thinking like a businessman,” she said. “You need to use innovation, enterprise and creativity.”

Team DraftFCB competed against 20 other countries in the global final. The overall winner was Australia and Japan won the creativity award.