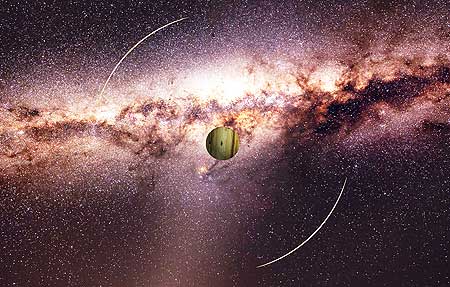 Watch an animation of the free-floating ‘orphan’. 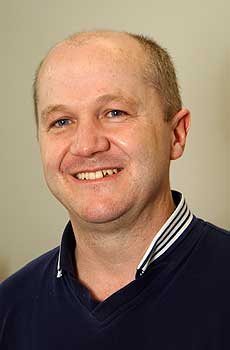 Software developed by a Massey University computer scientist and astrophysicist has led to the discovery of free-floating ‘orphan’ planets – once the subject of science fiction.

Dr Ian Bond, based at the Institute of Information and Mathematical Sciences in Albany, says the discovery has major implications for understanding the dynamics of solar systems. He has analysed data from telescopic camera recordings by a 1.8 metre telescope at Mount John University observatory at Lake Tekapo. It has captured variations in the brightness of some 50 million stars in the Milky Way galaxy.

He is part of an international astronomy study called MOA (Microlensing Observations in Astrophysics) involving researchers from Massey, Auckland, Canterbury and Victoria universities, as well as from Japan and the United States. The study found evidence of 10 Jupiter-sized free floating gas giant planets, also described as “orphan” or “rogue” planets, that are not believed to be orbiting stars. A report on the discovery has been published in the latest Nature online science journal. The article is titled Unbound or distant planetary mass population detected by gravitational microlensing.

“It’s a big deal. It’s like finding a needle in a haystack – the sense of discovery is hugely exciting,” Dr Bond says.

The discovery has led to speculation that smaller, Earth-sized free-floating planets – yet to be detected –may be more common than stars, and that Earth may have a long-lost ‘sibling’ once part of our solar system. Study authors say drifting, stray planets are likely to have been “ejected” from solar systems because of close gravitational encounters with other planets or stars. Another scenario is that they form like brown dwarf stars, and are labelled “sub-brown dwarfs”, which are thought to grow from collapsing balls of gas and dust but without the mass to ignite their nuclear fuel and produce their own starlight.

Computer software to process 50 gigabytes of images per night can analyse and chart gravitational microlensing events – the distortion and observable magnification of a star’s brightness when another planetary body passes in front of it. Variations in the timing and duration of microlensing patterns led to the discovery, he says.

Gravitational microlensing is an astronomical phenomenon which allows the study of planetary bodies that emit little or no light, and refers to the bending of light, first discussed by Albert Einstein in 1915, that occurs when a distant star gets aligned with a massive foreground object.

“The microlensing effect is very recognisable,” says Dr Bond. “The time scale of a lensing effect depends on the mass of the lens [planetary body]. If the ‘lens’ is a star, it takes 10 to 20 days to pass in front of the star, and if it's a planet, it’s a much shorter time.”

He has detected around 3000 microlensing events since 2006, and analysed 500 of them. The MOA study focuses on a segment of roughly 50 million stars at the centre of the Milky Way, which are 25,000 light years away and are a fragment of the estimated 100-400 billion stars and 50 billion planets in the galaxy.

The MOA project hopes to find smaller orphan planets closer to the size of Earth in the future.

Captions: (top) Dr Ian Bond, and (below) a computer generated image of a microlensing event.