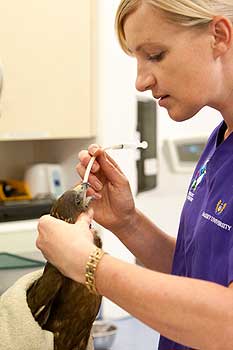 Massey University wildlife veterinarians want a total ban on the use of lead shot in hunting, saying it is having a detrimental effect on many native species.

Dr Kerri Morgan says the Wildlife Health Centre is treating a growing number of native species, some of them endangered, with elevated lead levels.

At present, lead shot is banned within 200 metres of a waterway, but Ms Morgan says its presence elsewhere makes it hard to keep out of the food chain.

“For a number of years we’ve seen harrier hawks with clenched claw paralysis, which is associated with lead toxicity,” she says. “Their legs are rigid and their feet are clenched. We started doing tests for lead and found that there were high levels in these patients, which indicates that lead is contributing.”

These are markers for what is going on in the environment, she says. “Harriers feed on live prey, but they also scavenge and can ingest lead by eating animals that have been shot with lead pellets, such as rabbits and possums.”

These findings have been documented in a paper to be published in the Journal of Wildlife Disease. Dr Morgan and her colleagues examined 25 harriers admitted to the Wildlife Health Centre and found 44 per cent of them had elevated blood lead concentrations. Six of those birds also had the clenched claw paralysis.

Once lead is in the food chain, other scavenging birds such as giant petrels and gulls are also at risk, she says.

While banning lead shot around waterways was a good step, Dr Morgan says their research shows it is still prevalent. “We’re also seeing high lead levels in New Zealand falcon, which is an endangered species, and have even found it in takahe, a critically endangered species.”

She says it is a public health issue as well. “Of major public health concern is the fact that despite the ban on the use of lead near waterways, we are still seeing lead toxicity in waterfowl,” Ms Morgan says.

“The consumption of game meat has been shown overseas to result in hunters’ families having higher blood lead concentrations than the general populace. Even low levels of lead in people are known to cause systemic, cognitive and behavioural disorders.”