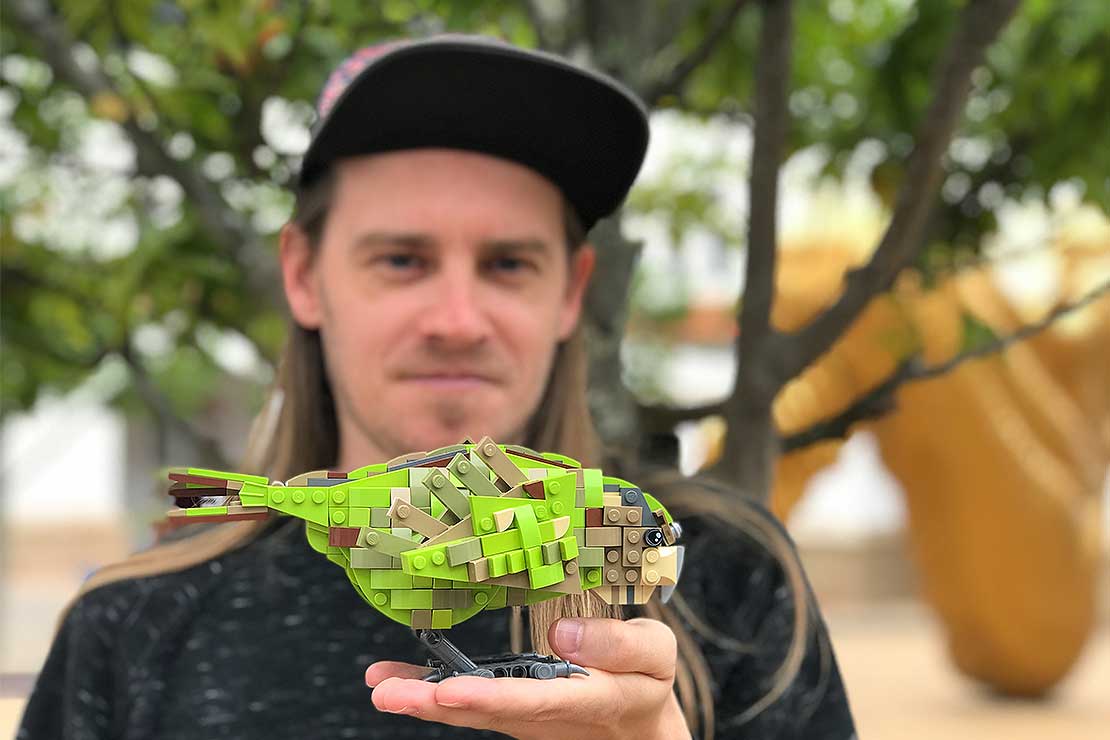 Hayden Pickford with his model kākāpō

A Massey student is inching closer to his dream of an official Lego set featuring the endangered kākāpō.

Bachelor of Science student Hayden Pickford began the Lego kākāpō project in June 2018 through the Lego Ideas platform and has so far achieved just over 8,500 supporters in just nine months. If the project gains 10,000 supporters, Lego will review the design and it may become an official set to be sold in stores worldwide.

The third-year student, majoring in zoology and marine ecology, hopes to reach the goal before the next review process in early May 2019.

“I enjoy making New Zealand birds because I think we have such amazing and unique fauna,” he says. “I decided to put the kākāpō on Lego Ideas as a globally popular company like Lego could have a positive impact on the conservation of this species. At the very least, it can draw attention to the kākāpō and other endangered species, and perhaps someone can learn about a species they may have never even heard about.

“If someone saw the Lego kākāpō and realised an interest in animals or conservation, then that would be awesome.”

The model kākāpō and baby kākāpō

The model is 10cm high, 25cm long and has moveable wings. Having made a few smaller New Zealand birds out of Lego, including a kingfisher, Mr Pickford wanted to try something a little more ambitious.

“To design the kākāpō I first used a digital program to make sure ideas would work without having to search for different parts. I try to build anything I make with bricks I already have because it means I have to be creative, but ultimately, I did have to source a few bricks. The initial design took around 13 hours to finish. I imagine I have spent at least another 30 hours making adjustments to it to get it to where it is today. The kākāpō has moving wings and feet.

If the May deadline is not reached, the project still has until August 2020 to gather its remaining supporters.

“I am sure it can get there much quicker than that. I hope for it to be in the next review. There are three review cut-offs each year. Any project that has made it to 10,000 supporters between each cut off is reviewed for an official Lego product. Generally, around five to 15 designs will make it to 10,000 over this time. There is no set number for how many of the different designs Lego may select – they might make all of them, or they might make none of them). If it is selected, the kākāpō will be in stores worldwide.”

Themodel kākāpō has been on display at MightyApe, Toyco, Toyworld Albany, Toyworld Sylvia Park, Moore Wilson's Wellington and at the Auckland, Dunedin and Christchurch Brick Shows.

Supporters of the project include the Department of Conservation, Kākāpō Recovery, Sirocco, Forest and Bird, Predator Free Trust New Zealand, and David Wardle at Brickset.

Become a supporter of the Lego kākāpo